All Oklahoma school-age inventors should compete to attend this statewide exposition.

Many school districts, however, are located in sparsely populated areas and/or do not have finances to transports students far. We salute the founders of this 25+-year-old model, which can be adapted regionally, by counties or districts--large, small or cooperatively.

Every school--public or private--can create its own version of this event. Recruit judges from business, college, military, Career Tech, or others. Eventually, create a pathway to get local winners to the Oklahoma Student Inventors Exposition.


The Oklahoma Student Inventors Exposition allows students, 1st through 12th grades, to show their inventions. Winners and their teachers receive money awards, trophies and medals. For example, in 2013, winning students and their teachers were given $150 each.

Patent attorneys, parents, the public, and others attend. Proud parents bring folding chairs and sit near the jam-packed display tables where their children show off their inventions. In 2013, 162 students earned the honor of competing. In 2015, over 400 youths from 85 schools displayed their inventions. Each year the expo grows. Some schools represented in 2015 were Bethany, Del City, Guthrie, Moore, Oklahoma City, Poteau, Seminole, and Shawnee.

The public is encouraged to attend this event, as the young inventors enjoy showing and explaining their creations to visitors. Positive comments from guests also help encourage the students’ creativity and propel them forward to more problem-solving challenges. If someone strolling through does not inquire, the inventors often will engage the onlooker first. "Let me tell you about..." 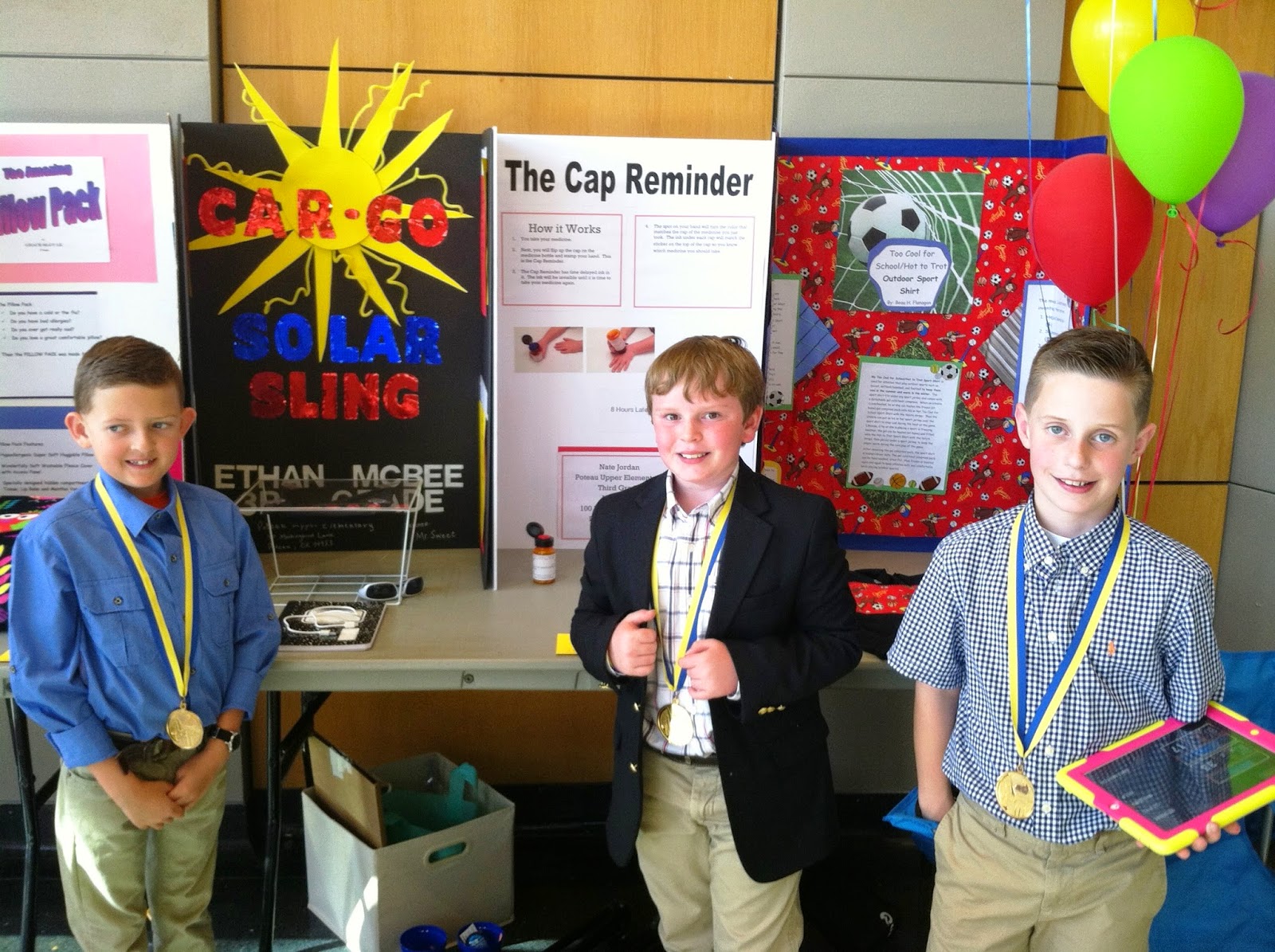 Regardless of grade-level, each had a problem to solve. One young inventor's dad drives much, and she was concerned he would fall asleep at the wheel. Her invention was an electronic device that would send a voice warning if the driver's hand was off the steering wheel for three seconds.

Another young man invented a garage attic ladder slide because his mother had difficulty carrying large plastic bins down the attic stairs.

One young man's friend had a heat stroke so the inventor found a way to insert in a hat, cap or helmet a hot or cold gel mask. In the above photo, the young inventor on the right, a soccer player, used a variation of a hot and cold gel pack, secured inside a cloth cover, to attach with Velcro to his soccer shirts. 'Suitable for all kinds of weather!

The list is endless as is the creativity, and the sophistication and practicality of the inventions varied. Undoubtedly, some of these students will soon be on ABC's Shark Tank. 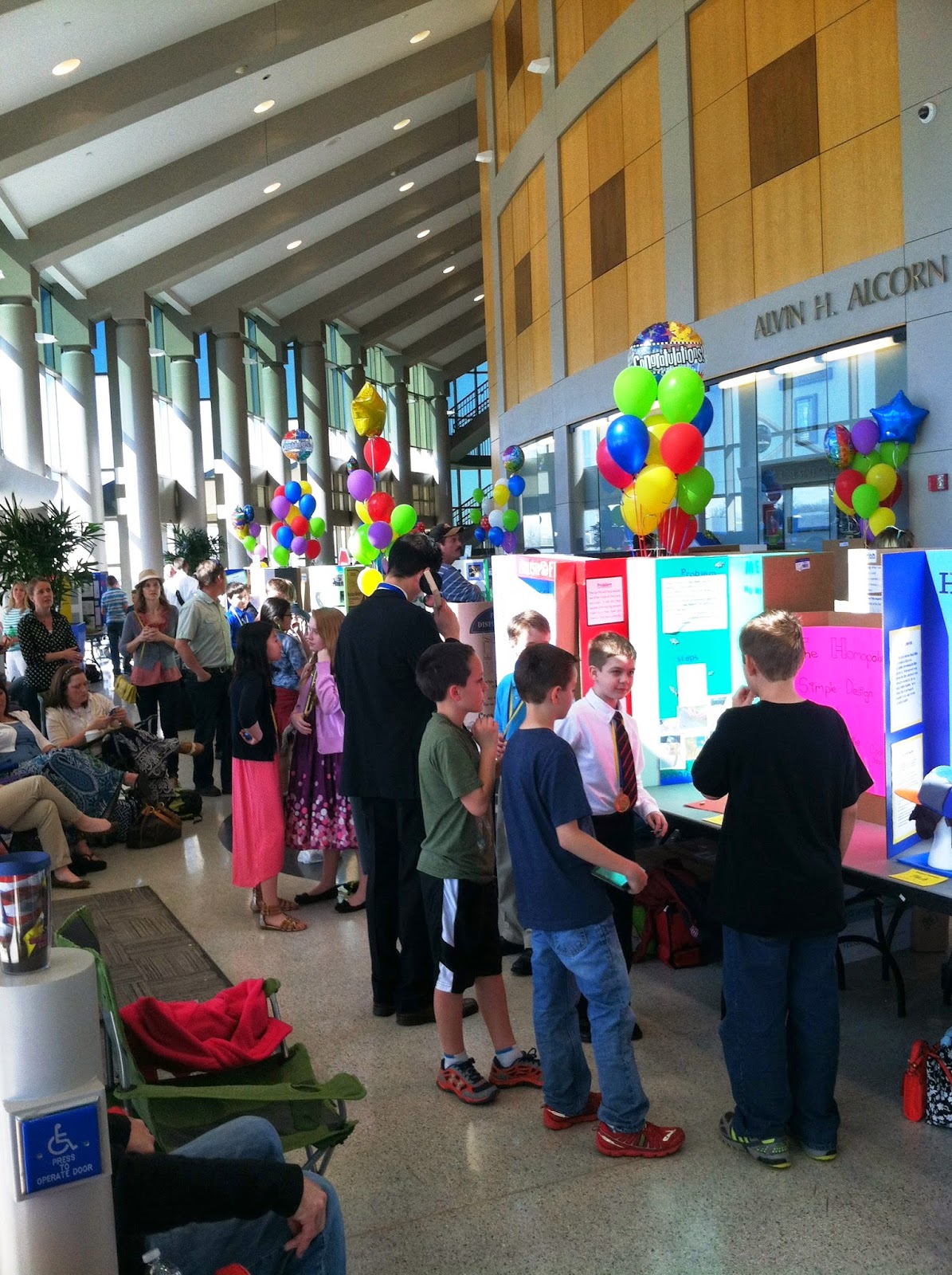 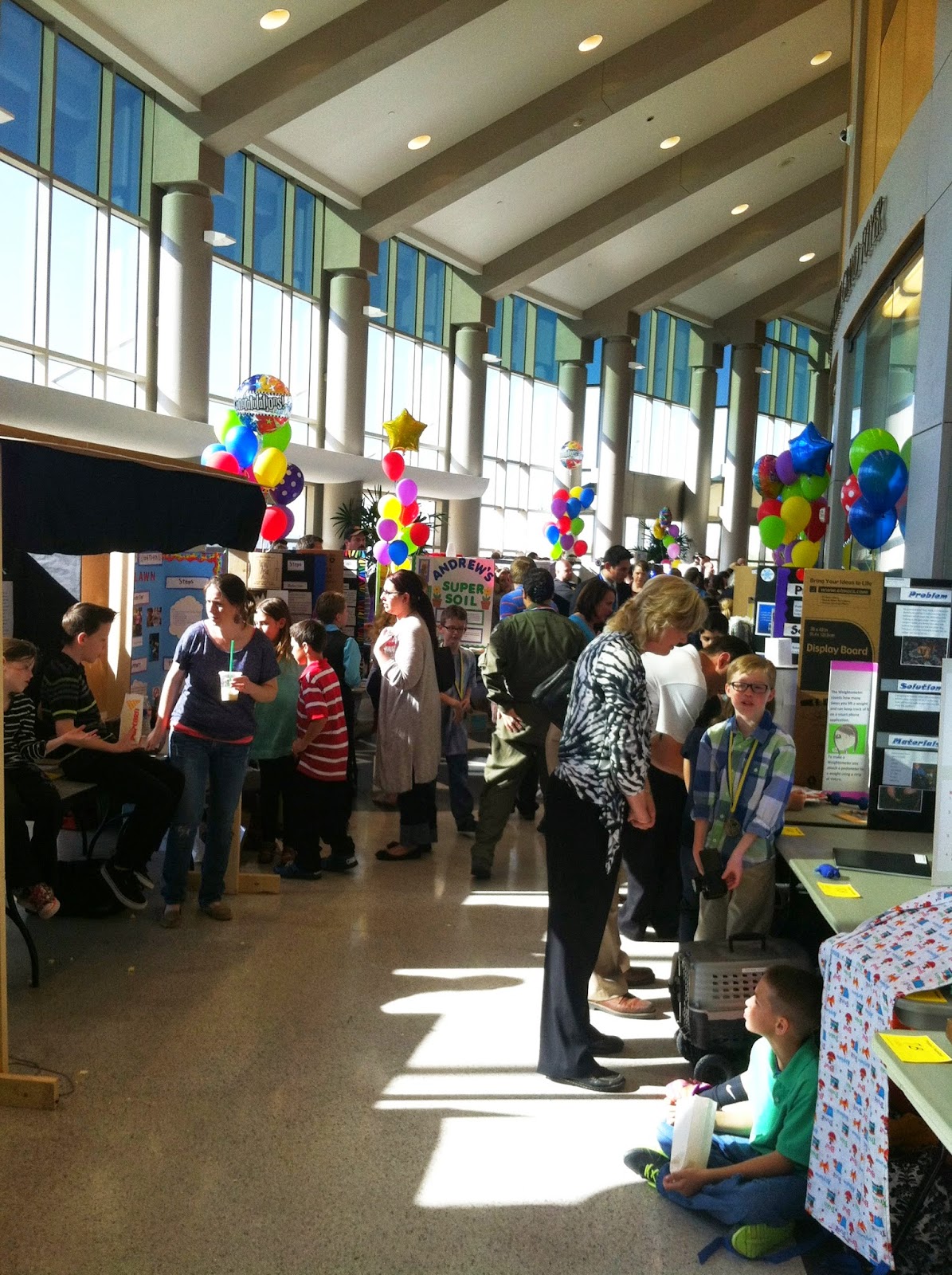 Trifold display boards crowded the tables. Young inventors chiefly stationed themselves by their creations. Family members can be seen in the photos as well as some fatigue-clad judges, provided by Tinker Air Force Base. 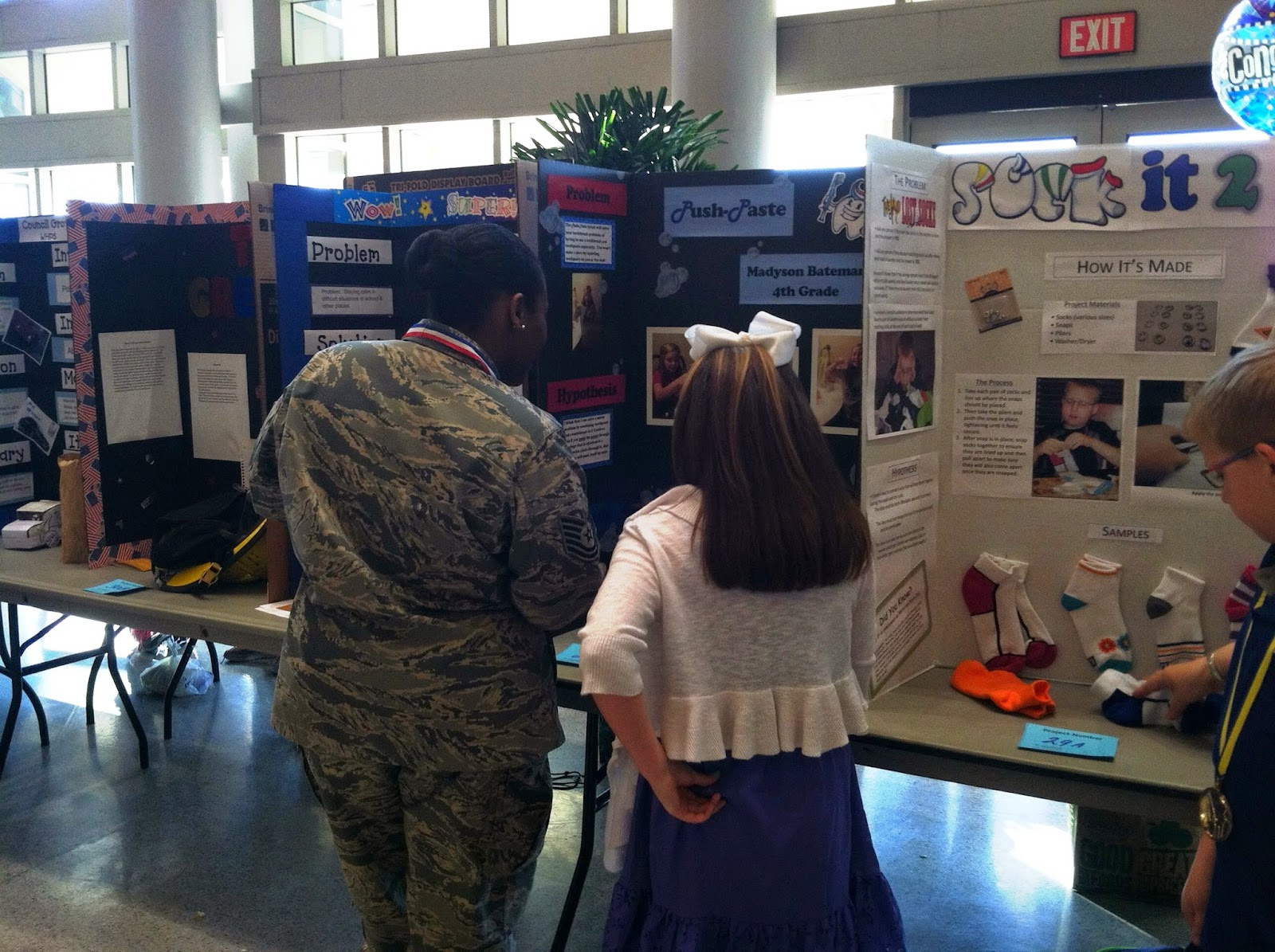 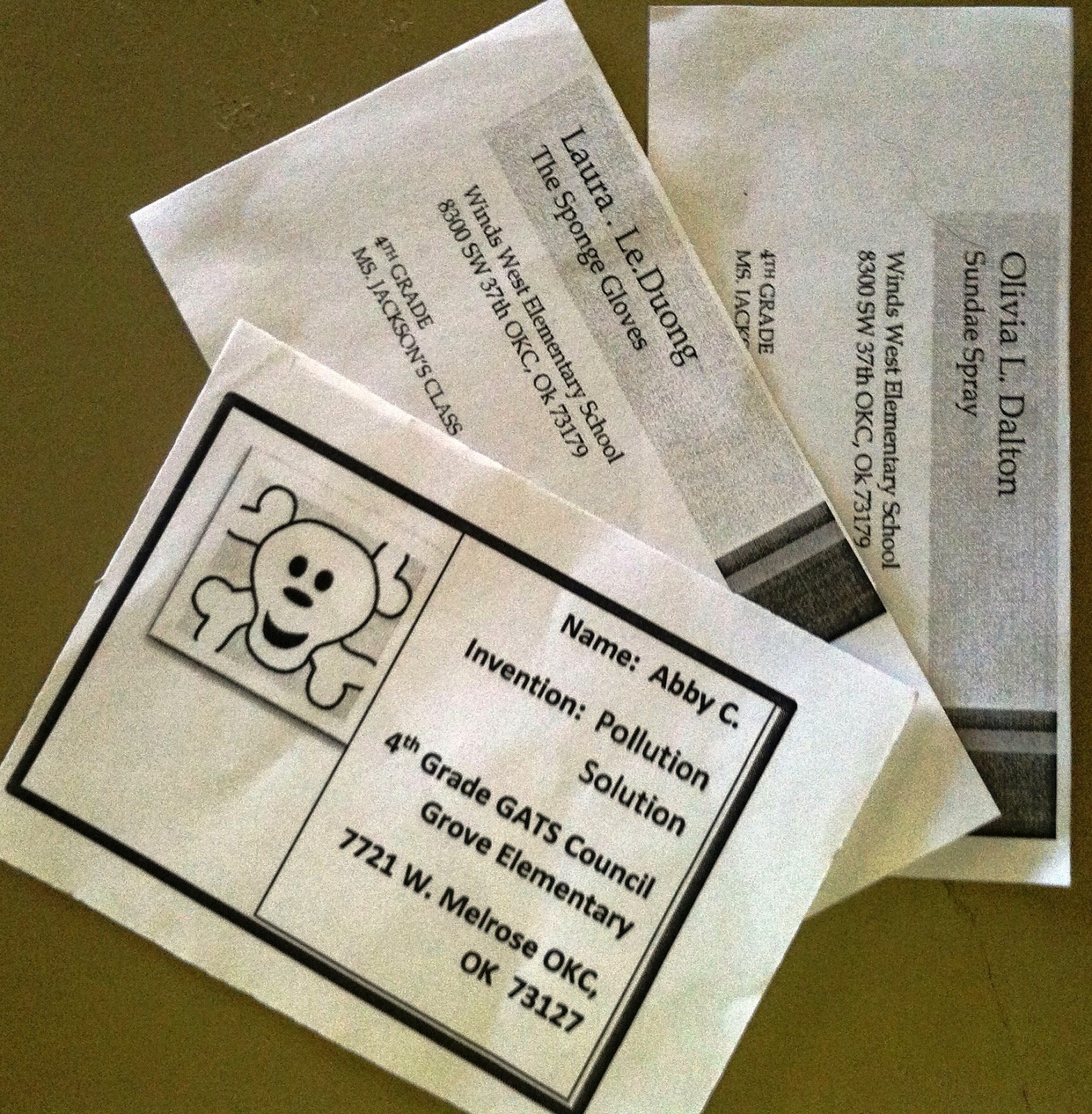 Each inventor provided business cards printed with his or her name, invention, school, school address, grade, and teacher. Even the "business" cards varied widely in design.

Judges Cori Fowler, OKAN Americorps volunteer, and Cedric Currin-Moore, STEM coordinator for the Oklahoma Afterschool Network, flank Jesse Chavez, inventor. Jesse envisioned the perfect spy device for everywhere--underwater, in the woods, outside a house, in a planter by an office building, in the snow, etc. His Spy Rock, equipped with a camera and with retractable, mechanical legs like a spider's, could be activated by remote control yet camouflaged for any location. How original is that!

Below are Suzi and Shannon Stephens. Suzi wanted to demonstrate how kids can be creative rather than watch television, play online games, or roam the internet. She wrote a script for a video entitled The Mystic Island, built the set, shot over 200 still photos, moving the action figures in each photo, timed the play sequence so the action appeared like a movie, and posted the finished product on YouTube as an example for others. (Suzi's proud grandmother Summer was also at the expo.) 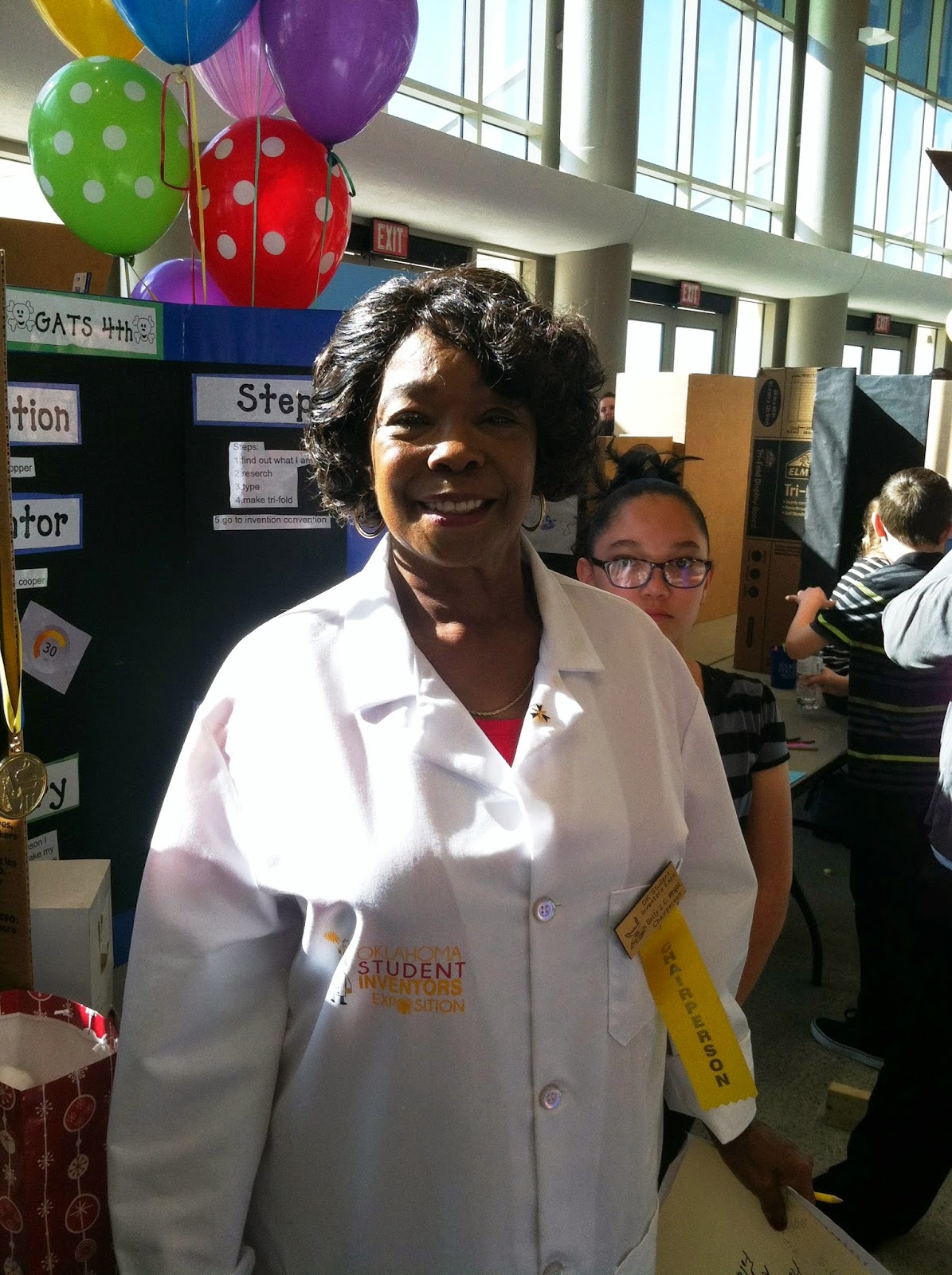 Betty J.C. Wright is a co-founder and chairperson for the Oklahoma Student Inventors Expo. A truly extraordinary teacher, Betty is a 2014 inductee of the Oklahoma Educators Hall of Fame among a myriad of honors and achievements. A genuine and loving dynamo, who never seeks glory for herself, Betty continues to create or make a way for students. 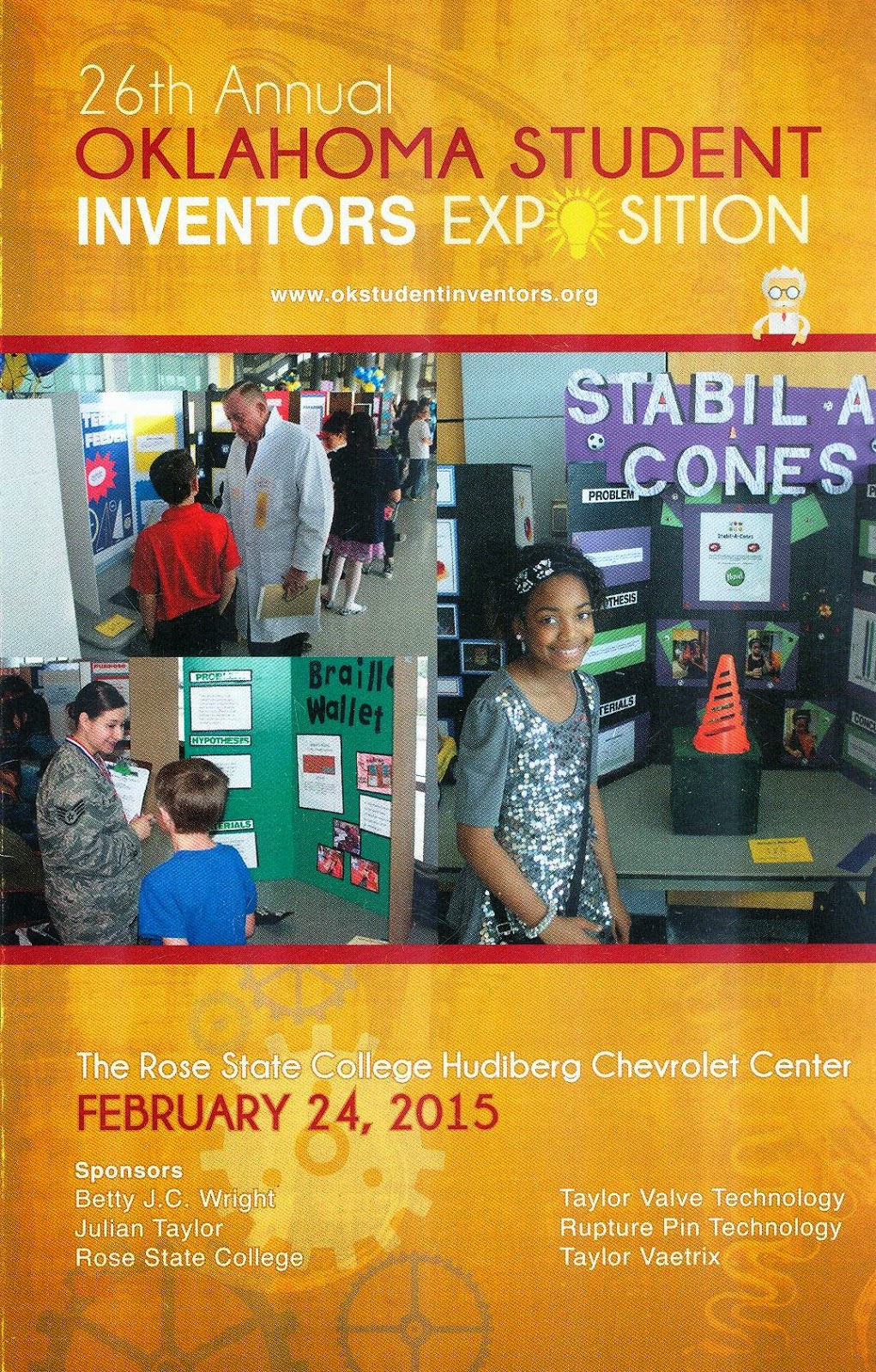 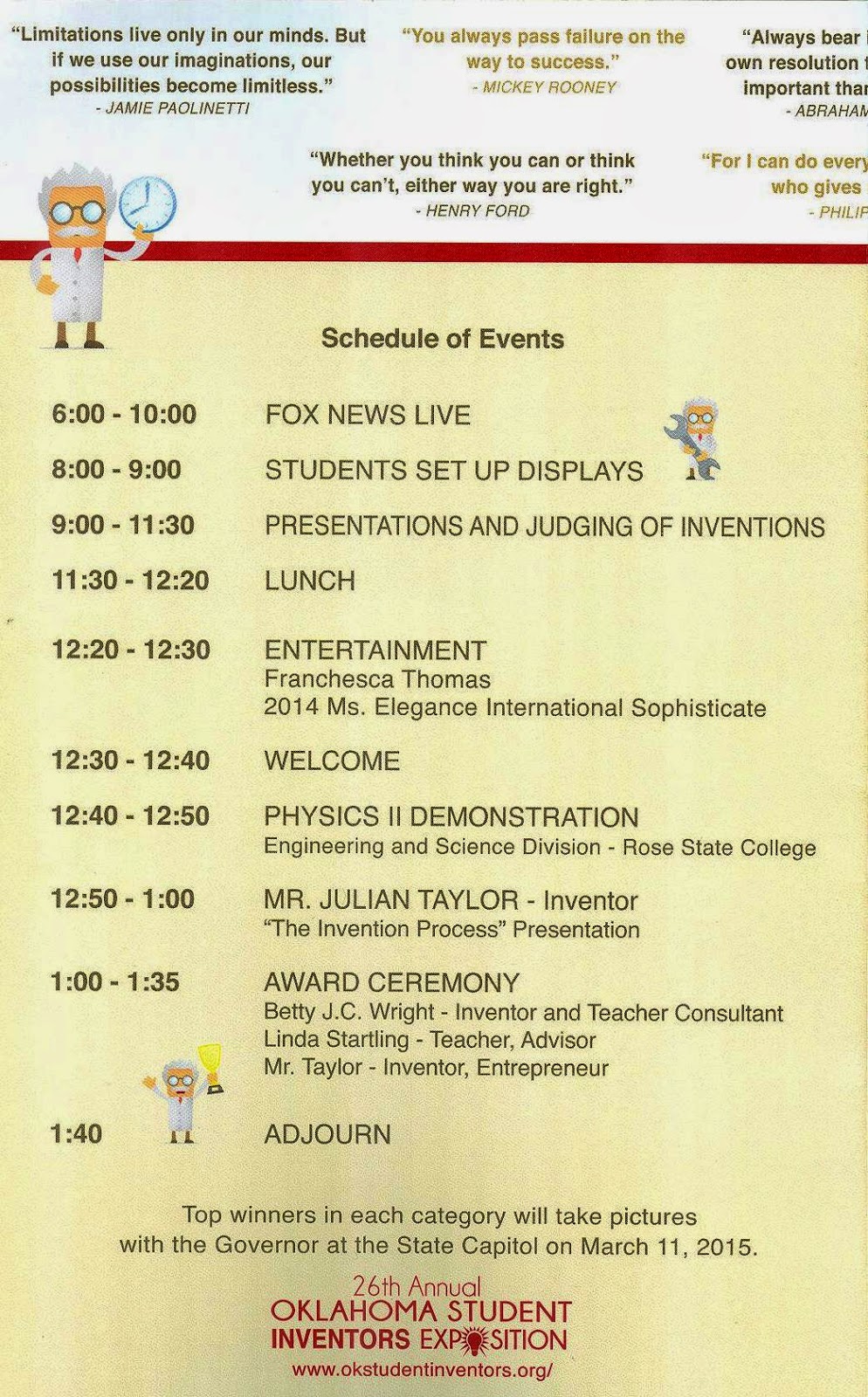 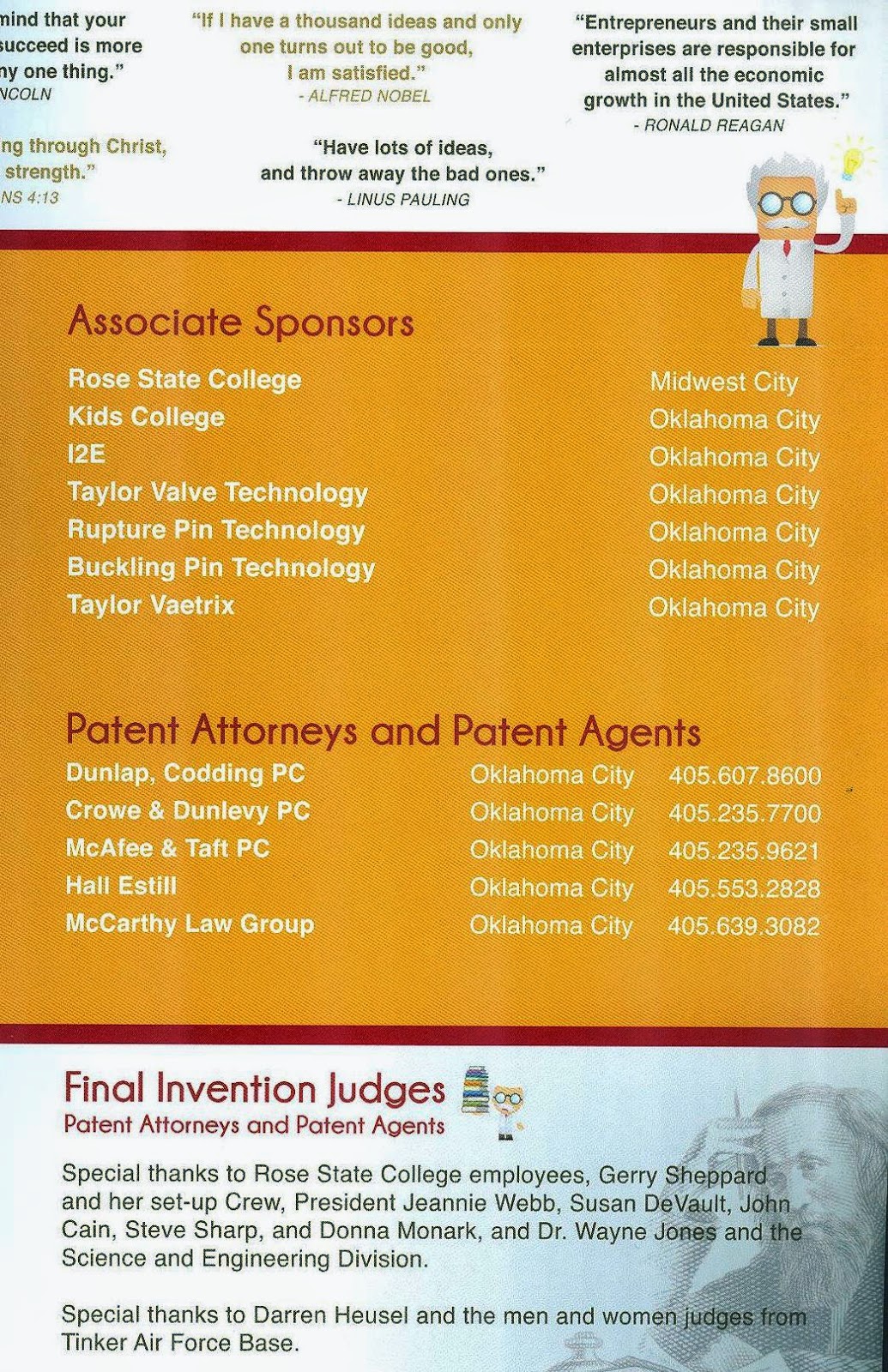 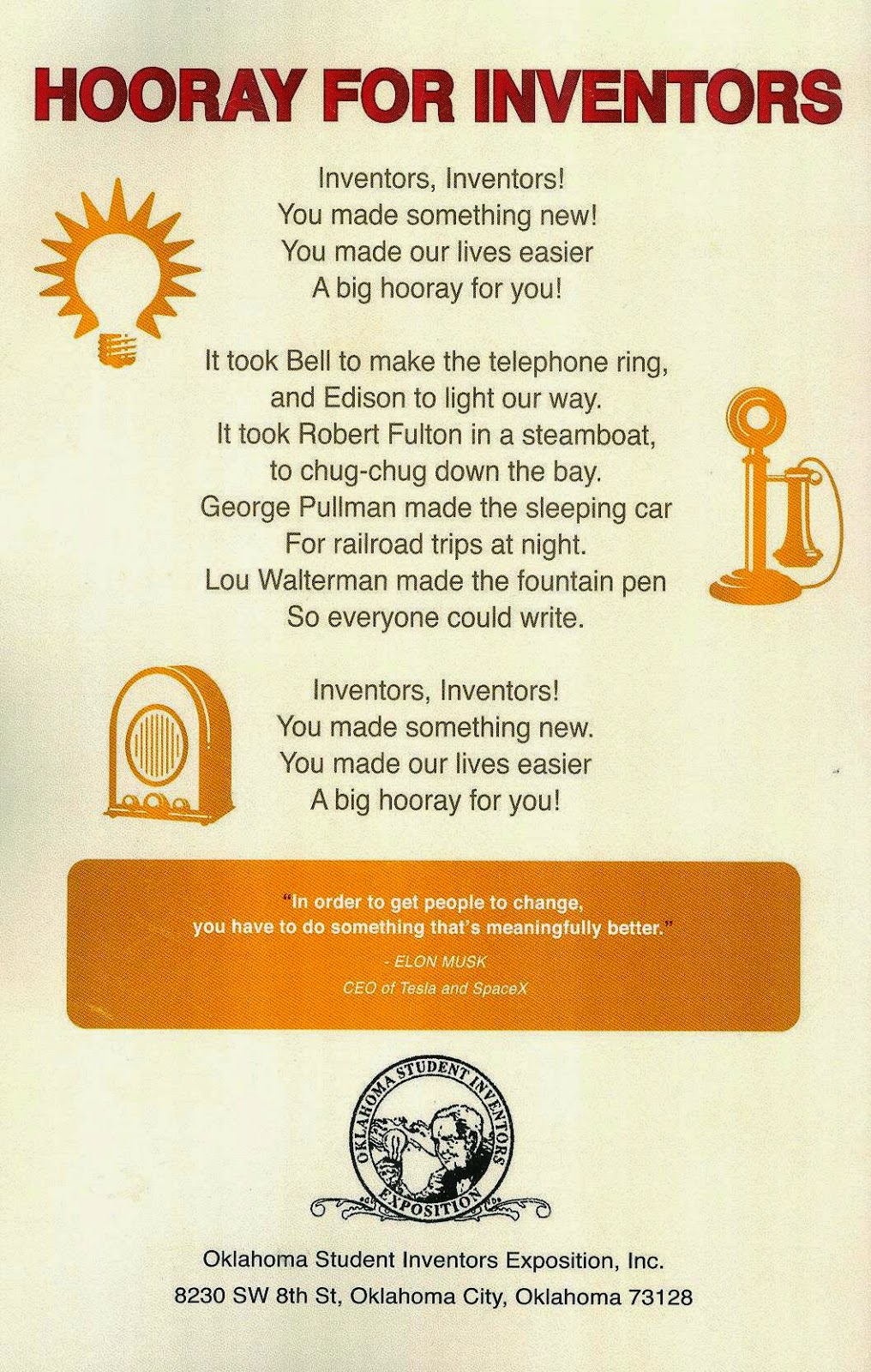 MIDWEST CITY, OKLAHOMA — Too dark to find something in the bottom of your purse?

“Yeah,” she says after illuminating the inside of a large handbag. “There’s a secret pocket inside.”

Got a messy sandwich on your hands and not in your mouth?

She says, “It keeps all of your food from spilling everywhere and making a big mess.”


For answers to these and hundreds of other everyday problems all you have to do is ask imaginative kids like Jared Stewart and Tyler Whitlock who came up with a perfect way to slice pizza.

Their invention is two scissors welded to a triangular sheet of aluminum.

“You put it under the pizza and it makes a perfect slice every time,” says Jared.

25 years ago there were just a handful of kids who presented ideas for the first Oklahoma Inventors Exposition.

Olivia Atkinson has a spray for that.

Want to learn to skateboard but don’t want to get hurt?

Gavin Beverly has training wheels for that.

“Have you tried it out,” asks an exposition visitor?

The younger Burns came up with a pillow that doubles as an alarm clock.

“He had a hard time hearing it,” he explains.

“You can find it with the push of a button,” she explains.

So what are kids thinking about?

Moore students Jaden Wattle and Kylie Thompson came up with a safety vest for kids to wear if they’re at school and a tornado hits.

Highlighting one of its many features, Kylie says, “There’s a flashlight that you can shine on one of the reflector strips.”

Kaden Fox from Poteau was thinking about recent school shootings when he came up with his Safe Haven School Desk.

A full scale model would be made of steel and allow single students to lock themselves inside.

He says, “I thought, ‘what can I do to prevent something like that.”

A wealth of ideas and treasure for the best.

Their teachers got the same.

If you’re worried about the future, the solution is probably walking around in here. 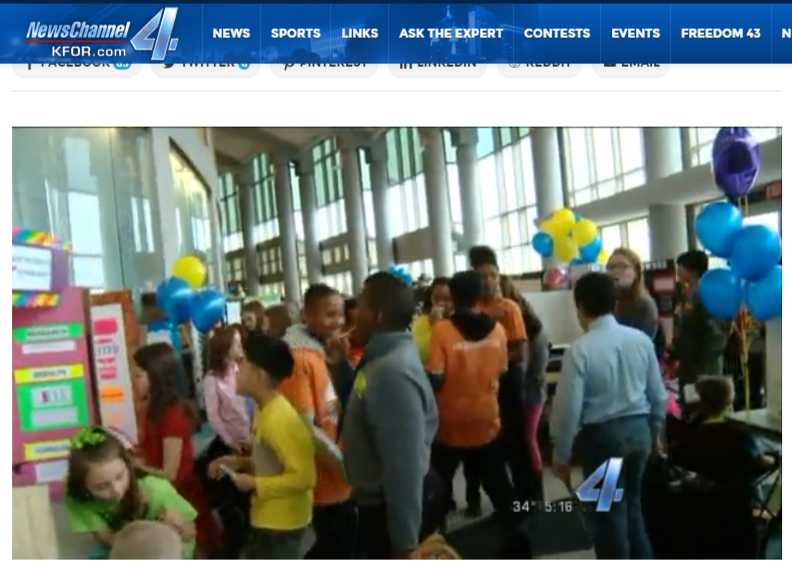 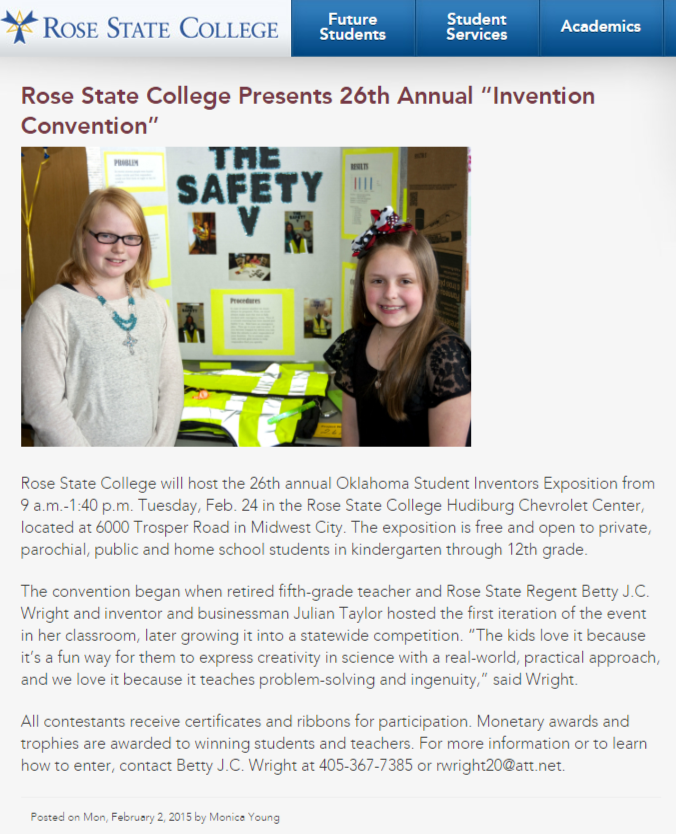