We don't have this year's numbers yet.

Opening Remarks
Xan Black's opening was so powerful that we post it so you can share and inspire.

"I’d like to tell you about a very strong woman named Sonia Kovalevsky. She was born in 1850 in Moscow. As time went by, her parents decided to remodel their home. Since there was no Pinterest – what could they do? When making wallpaper selections, they decided to take Sonia’s uncle’s calculus book apart and use the pages to paper young Sonia’s bedroom walls.  She recalls spending her early childhood working to understand the calculus that papered her bedroom walls and to figure out the original order of the pages.  So now you know what you need to do when you are a mom – paper the kids walls with a calculus or physics book and all will be well!

Those early years had a profound effect on Sonia Kovalevsky. She became not only interested, but very talented in mathematics. Alas, in Russia at that time, women could not attend University. So Sonia decided to leave Russia. Another hurdle was that in order to travel abroad, Russian women had to have written permission from their father or their husband. So what could Sonia do? She married! She married Mr. Kovalevsky, a young paleontologist who later worked with Charles Darwin! The young Kovalevsky’s moved to Germany where Sonia was able to enroll at the University [of Heidelberg]. She was not, however, allowed to enroll in classes – she could only audit them. [Later in Berlin where she was not allowed to audit classes,] she paid friends to take the classes she wanted to study and then share notes with her. Sonia Kovalevsky overcame all of these odds and became the first woman to receive her PhD in Mathematics and is noted for her work in Differential Equations.

Fast-forward 100 years from the time of Sonia’s work and you will be in the time frame when I was pursuing a degree in Petroleum Engineering. I didn’t have to pay anyone to attend classes for me, although I was definitely tempted to do so on more than one occasion! We didn’t have any struggles of the magnitude that Sonia faced, but we did face our own challenges! I recall being either the only female or one of two or three girls in all of my classes. The other students and faculty were largely supportive, but not entirely so! I remember one occasion when our Society of Women Engineers group was invited to attend an engineering banquet. Our advisor recommended that we dress “like guys” – wear pants and a shirt. They told that to the WRONG one! I wore my frilliest peach dress with ruffles on the shoulders that stood above my ears! I do not and did not surrender my gender to become an engineer!

In closing, I have been very inspired by a quote from Sonia Kovalevsky and hope that you will find it encouraging as well:

'Say what you know, do what you must, come what may.'

Say what you know – you don’t have to pretend to know things that you don’t – but you dare not hold back on saying what you do know!

Don’t be a shrinking violet – stand up and say what you know!

Do what you must – you may need to get up early, stay late, get to be best friends with Khan Academy, or join the stinky geek study group!  Whatever it takes – do what you must!
Our country, state and region are depending on you to do that!

Come what may – Once you have your mission, don’t let anyone or anything stop you!

Don’t avoid taking risks because you don’t know how things are going to turn out.

Step out and step up – start today – COME WHAT MAY!"


Baine's reader-friendly book, being perused above, is available through PDF also.

Before reading the next post about the reception, learn more about the competition below. 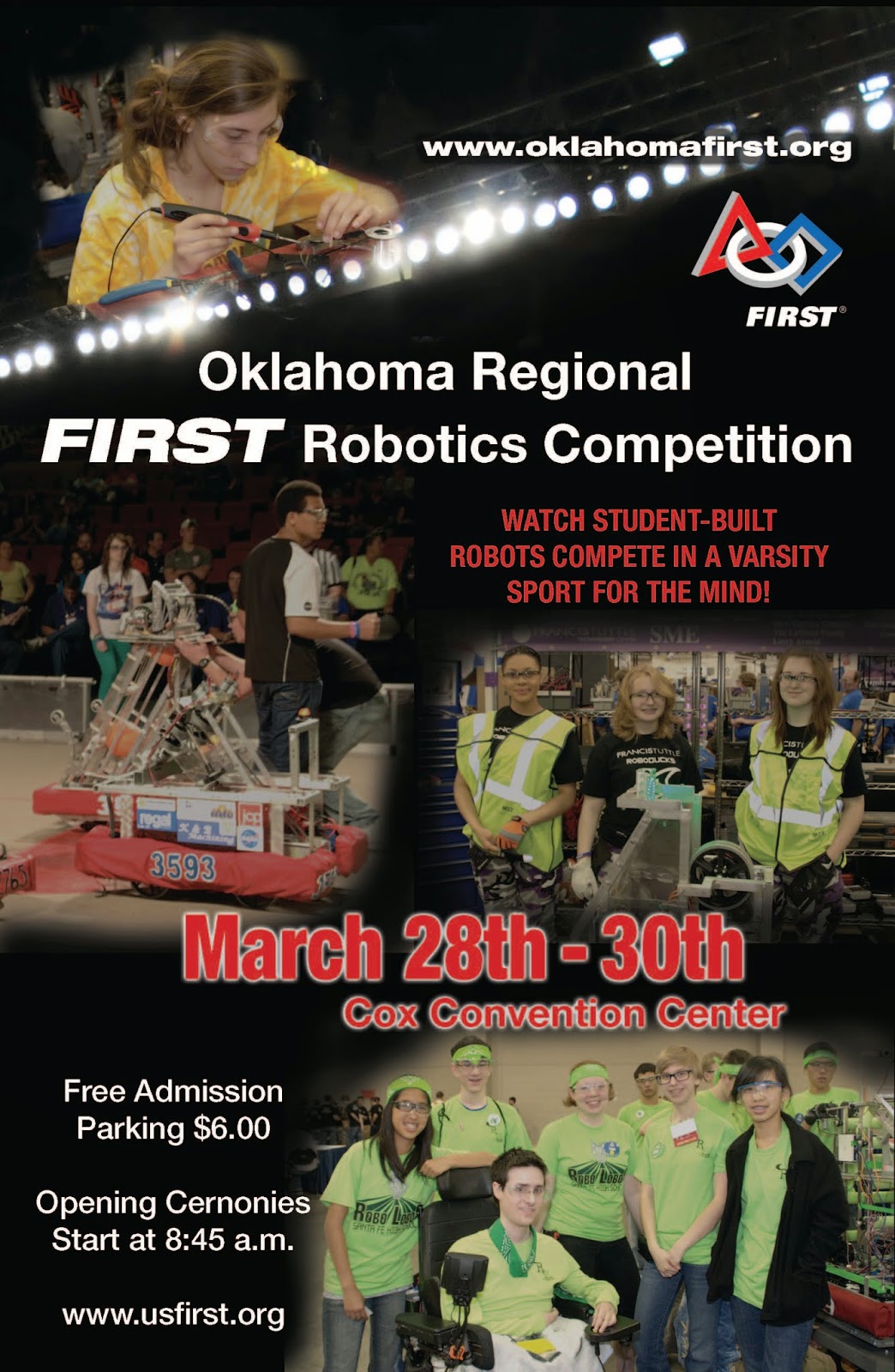 Since 2007, the annual Oklahoma FIRST Regional has been held at the Cox Convention Center in Oklahoma City. Teams from across the country compete in the robotics competition designed to pair professionals and young people to solve an engineering design problem and compete.

FIRST, which stands for “For the Inspiration and Recognition of Science and Technology,” is a nonprofit organization founded in 1989 by Dean Kamen. Kamen is an inventor, entrepreneur, and a strong promoter of science, technology, and engineering. He is best known as the inventor of the Segway. Kamen noticed that the number of American students in the science and technology field was widely decreasing and he wanted to inspire young adults to join the vast field of science and technology.