Most Viewed 2014 Posts from the Chronicle of Evidence-Based Mentoring, I

We decided to repost the most viewed ones, beginning with the first. 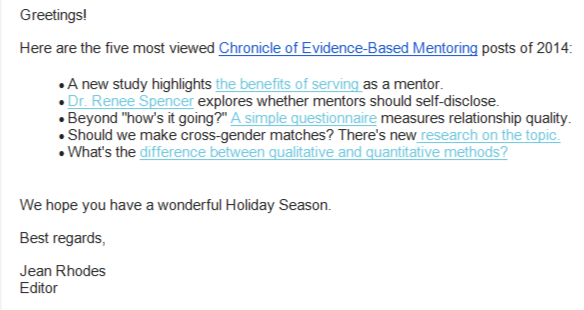 New study highlights the benefits of serving as a mentor

Ghosh, R. & Reio, T.G. (2013). Career benefits associated with mentoring for mentors: A meta-analysis. Journal of Vocational Behavior, 83, 106-116.
Background: Participation in workplace mentoring relationships is associated with a wealth of benefits for mentees. To date, however, few studies have considered potential benefits that mentors might derive from these relationships. Across the few studies that have explored mentor outcomes, there remains limited cohesive understanding of the ways in which mentors benefit from mentoring. In the current study, researchers sought to explore and synthesize studies investigating the benefits of mentoring for mentors within workplace mentoring relationships.
Method: Through use of meta-analytic design (see Chronicle post by Dr. Adar Ben-Eliyahu), researchers focused on studies that explored positive outcomes (e.g., job satisfaction and performance, organizational commitment, and turnover intent) related to mentors’ provision of psychosocial and career support, and role modeling to their mentees
Results: Compared to colleagues who did not mentor, individuals who served as mentorswithin their workplace reported greater job satisfaction and commitment to the organization. In addition, higher quality relationships were associated with even greater benefits.
While all three types of mentor support (psychosocial, career and role modeling) were related to positive mentor benefits, distinctions also emerged. Mentors who engaged in career support perceived that they had greater career success, mentors who engaged in psychosocial support reported being more committed to their workplace, and mentors who engaged in role modeling support reported better job performance.
Implications:
In this meta-analysis, being a mentor was associated with several positive outcomes including greater perceived career success, job performance and satisfaction, as well as more perceived connectedness to one’s organization. While a causal relationship cannot be concluded from the study’s results (i.e., being a mentor leads to these benefits), the findings from this study underscore the need to consider the mentor’s perspective, particularly consideration of the ways the mentoring relationship, a largely collaborative endeavor, influences both the mentee and mentor.
The findings from this study have implications for youth mentoring, specifically the need for both researchers and practitioners to consider potential mentor outcomes in more direct ways. For example, a systematic analysis of mentor benefits within youth mentoring could present a comprehensive picture of current findings as well as potential gaps that could be addressed in future research.
In addition, evaluations should examine the potential benefits to mentors, include the capacity of relationships to enhance a mentor’s attachment to a particular community. Highlighting potential benefits may serve as an incentive for individuals who might be in a pre-contemplative stage. The researchers note, “awareness of mentoring benefits may motivate mentors beyond the pro-social nature of their personality.”

Posted by Oklahoma Mentor at 3:18 PM